MATRIX – A trip in Generative art 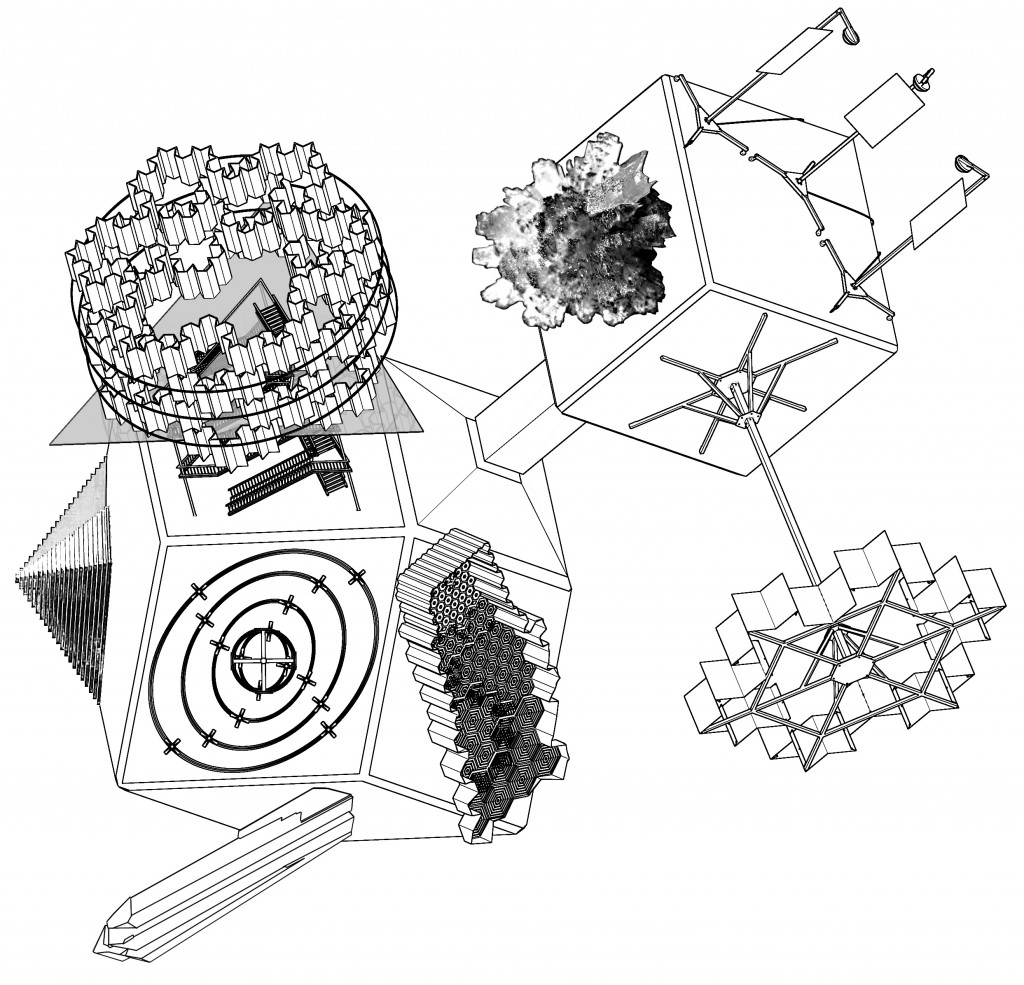 The thesis offered by various futurists, like the transhumanist Raymond Kurzweil, that humanity, through the above-mentioned technologies, could decide about its evolution seems more and more plausible. Changing our empathetic nature, our need for recognition would change our ethics and could therefore destabilize the political systems in which we live.

Let’s start from the general rendering of the research you did last year, what was it about?

I focused on fractal structures, auto generative systems and, more generally, on matrices. Fractals were studied because they are effective mathematical tools to describe a large amount of natural phenomena: in meteorology, to explain the formation of clouds; in molecular biology, to explain how the translation of DNA allows the formation of complex iterative structures inside the body such as the pulmonary alveoli, or the formation of synapses in the brain; in astrophysics to describe the formation of spiral galaxies. The study of the emergent properties of these systems needed the production of matrices to classify their features and simulate their interactions, to understand how simple elements, taken separately, can produce complex systems by associations.

In Crystals Overflights you observed minerals, could you tell us something about that?

I have a mineral collection, and I especially like those whose structure is particularly iterative. Crystals Overflights opens the areas of possible interpretations of my works by stimulating the imagination of individuals sensitive to its aesthetic. In Formal basis1, there is a series of images taken with a scanning electron microscope. This series has been realized with the help of Eric Laval, researcher at C2RMF, the Centre for Research and Restoration of Museums of France.

Tell us something about the electronic installation Matrix 1, what is it exactly?

Matrix 1 is an interactive installation. It consists of a sensor mat surrounded by palisades of polystyrene. The sensor mat comprises a hexagonal pattern under which there is an electric circuit. The circuit is closed if a person stands on the carpet, making contact between two aluminum sheets, normally spaced by foam pierced by holes. Several areas are cut under the carpet. The circuit sends electrical signals that are analyzed by a microcomputer wich transmits the results to a software simulation launched by a computer. The software generates a speech, that I wrote.

How do the sound signals work?

The more the subject is advancing on the carpet, the more the synthesized sound segments are long: the discourse becomes more intelligible. At first, only syllables are audible, secondly, fragments of words, then one can begin to hear complete words, then the sentence fragments, and finally entire phrases, until the final area, where the speech is complete. If several people are standing on the carpet, the person who would be the most advanced would be the one triggering the sound events.

Can you explain us the concept of the installation Elevating Fractal?

Elevating Fractal is a tread pattern comprising a ring of stainless steel poly mirrors suspended above the ground by a steel structure, consisting of two six-spoke hubs connected by a vertical axis. At eye level, the crown appears to be made of stainless steel panels arranged randomly. However, when illuminated by a bright light source, the shadow of the crown reveals that it is actually built following a very regular basis. Its topology corresponds to the vertical projection of Helge von Koch’s flake, iterated three times: a fractal invented by the scientist in 1906. To build the flake, it is necessary to draw an equilateral triangle, then to divide the edges by three, then to give rise again to other median segments.

What about the sculpture Spiral Galaxy?

In Spiral Galaxy the resin portions were stereolithographied, that is to say, they were laid in layers of resin with a computer controlled machine. The resin parts are crossed by steel shafts. This is a model showing the main formal elements of the other part of the installation Direct Empiricism. Ground poles each represents the orbit of a star system around its galactic center. The mast in the center of the model and the pads correspond to functional elements of the installation. The rods are fitted into two discs that make them twist. The propeller they describe extends vertically the spiral deployed at the surface of the upper part.

Hexagons and fractal structures, everything is so contemporary. Where did you get inspired?

Basic geometric structures always concerned humanity, even before the Platonic solids, because they are present everywhere in nature. In the essayA New Year’s Gift of Hexagonal Snow, the author Johannes Kepler draws a parallel between the shape of snow crystals, the cells of a honeycomb, and the provision of seeds inside grenades. The hexagonal structure is present in many natural objects because it is a guarantee of stability. The honeycomb is widely used in industry for its lightness and strength. As for fractals, they are of great interest to artists since their synthesis can be automated by writing algorithms that allow to crystalline structures.

Are those shapes technically easy to produce?

Stereolithography is a rapid prototyping additive technique (bottom-up), unlike milling or sintering which are subtraction techniques (top-down). It is cheaper to print objects with a small volume. The more they are cellular, the less expensive it is to produce them.

Fractal shaped objects can be particularly economical to produce in terms of raw material: the Menger sponge is an excellent example.

Where did you learn to use all those digital tools?

I started with digital technologies as an autodidact. I started practicing computer graphics since I was 14. When I was 17, I’ve learned how to use 3D modeling. I mainly use Blender, an open-source freeware.

I learned to write algorithms mainly due to Algorithmic classes held by professor Jeff Guess at ENSAPC. Again, I use a free and open-source software: Processing, developed by programmers at MIT. I also use Arduino that works in the same programming environment.

I’m currently learning to work with Unity, an optimized software for programming video games. Students of the studio and myself have recently used it to create a virtual duplicate of the Centre Pompidou.

Your background is quite fresh, which are the most interesting theories at the moment?

The predictions advanced in the report Global Trends 2030, presented to President Obama in december and written by futurists from the National Council of Intelligence, provide a conceptual framework for the next fifteen years. The authors hypothesize new instances of power: NGOs, cities built from scratch, as well as trans-state networks.

The advent of technologies generally attributed to transhumanist views could be added to these changes: subcutaneous chips, neural implants, virtual reality. The societal importance of these transformations naturally interested artists. I feel that the pace of technological change pushes us to learn about these innovations.

Do you feel like people is understanding your work?

Scientists and artists might have concomitant goals, but their objectives are ultimately different. Scientists seek to provide through their research hypotheses ways for understanding reality. Scientific discourse is rebuttable, and their findings can be repeated and tested by the entire scientific community.

Artists seek to deliver models of subjectivity resulting from their emotional reactions, specifically to contemporary paradigms. Although their work is also judged by the community critics, institutions, and public, they do not seek to produce theories aiming to be true, but to stimulate the imaginatives functions of the brain and to alert their audience about themes they consider to be relevant.

At the moment Donatien Aubert is taking part of ONS, an exhibition organized in the transdisciplinary course of ENSAPC, National HigherSchool of Arts of Paris-Cergy, focused on developing associative frameworks between scientists and artists.